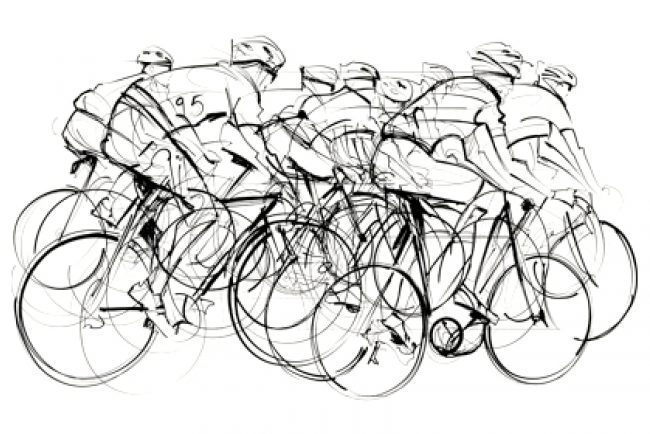 Bear with me here, I do have a point! Having got in to road cycling about a year ago, my passion for the sport has had its ups and downs. At first, I just wanted to give up. It was so hard (because I was unfit and didn’t know how to cycle efficiently) and everyone was so much faster than me. I couldn’t keep up and felt like a failure.

It is incredibly hard in life, and cycling, when people whizz past you. They have all the expensive gear, charging ahead of you, and it makes you want to give up. However, as you develop the essential skills and knowledge, you get fitter, working harder and more efficiently. And over time, you can save up and buy a lighter bike and some better clothes.

Before you know it, you are now the one overtaking one or two people. You feel great, your hard work is paying off. But then, there they are again. There's always someone faster than you, getting where you want to be, but at a seemingly easier and quicker pace.

I struggled with these ups and downs for a while, comparing myself to others constantly, and getting nowhere.

However, after time, you realise the people overtaking you probably train everyday, or they might charge past you but then they burn out and you pass them a little later down the road. If you try and keep up with them, you'll only burn yourself out too.

So, what I’ve learnt from cycling, and about life, is something similar to what Baz Luhrmann said a while back, whilst singing about sunscreen:

You have to ignore what everyone else is doing in life and go at your own pace. Sometimes you're ahead, sometimes you're behind. We're all going in the same direction though. So, along the way, you might as well take in the stunning views, work as hard as you can, rest now and again, keep yourself well fueled and enjoy the ride!

The three coaching sessions I have had with Alice have all been on different areas of my life that I wanted to improve. She has been a great help in all of them, coaching with a friendly style that allows me to come to my own realisations and conclusions. Overall, the sessions have been a huge help with my personal life and in heading off on my journey to set up my own business. I have already recommended her to a number of friends.